One of our wfla lodges in Cadott, WI, No. 141, is a strong example of how neighbor ingenuity and community support renewed the life in their old Bohemian hall. The vision of one person led to not only membership with WFLA but to renovations to the hall, its membership, and community service activities. Through her perseverance and enthused determination, she was able to transform their hall from an underused building to a point of pride in their community. 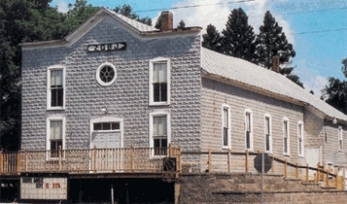 About 15 years ago, Lori Peterlik had a thrift sale for the first time at the Cadott, WI lodge hall. As she was organizing the tables and clothes racks, setting up the hall for the next four days, she wondered why the Bohemian Hall was not used much. “It’s such a neat place but it could be improved so much!” she thought. She heard many local residents tell stories about how they “used to” come here for various events. She thought it might be fun to do plays there, with such a historic stage and authentic backdrops with Czech scenes painted on them.

Lori told a few active members that she would be willing to paint the hall if they would buy the paint. Her long-term goal was to restore it to its former glory when people used the hall for polka dances, plays, school, weddings, and anniversaries. The older members were excited to have the help and agreed. Although Lori did most of the cleaning work herself, she did obtain the help of her family and another home-schooled family for a few days of cleaning. As they began to do more activities like bake sales, a pork and polka fest, a sock hop, and a Long Live the Squeezebox accordion jamboree, community interest began to grow. They also mustered forces to teach kolache-making classes (Czech pastry) at the local grade school. Lori then wrote fundraising letters to members explaining the need to renovate and restore the hall. Because of the generosity of the local members, the funds started coming in.

Lori persuaded Jane Moucha, another neighbor, to help by telling her, “We need to join wfla and renovate this place!” Jane agreed, and the two went to work on the project. Jane and other residents of Cadott donated craft items, books, clothes, household items, and furniture for their first thrift sale.

Unfortunately, the duo found various problems in the structural soundness of the building. First, the foundation was crumbling in places, so they decided to install beam supports under the crawl space. Two years later, heavy snow broke 12 of the roof tresses that dipped the aging roof. As they replaced the broken tresses, they also had the electrical wiring redone. When they put in all new windows, Lori obtained an old stage curtain from the high school and turned it into curtains for all the lodge hall windows. Because the hall had been designated with the honor of being on the National Register of Historic Places, the repairs had to be carefully designed for consistency.

Once the hall was more fully restored, the townsfolk began coming back to the hall events more regularly, exclaiming how beautiful it now looked. Lori, who enjoyed talking to the older Czech people, had also been capturing their stories in the local newspaper, called Czech News. For her leadership, in 2002, Lori was honored as wfla Fraternalist of the Year. Jane was given the same national honor in 2008. Members also celebrated the lodge’s 100th centennial in 2004.

Since 2008, younger members have been producing and performing original plays at the hall as the Bohemian Hall Amateur Theatre players, and the lodge members host numerous events as in the past. Not only was the building renovated, but the activities and spirit of the hall were restored to the former dream and enthusiasm of the early founders – to serve the locals and keep the fraternal spirit alive. See Lodge 141 on www.Facebook.com :Wisconsin and Upper Michigan Lodges of WFLA, and the WI website at http://www.wiuplodges.com/.